A few months ago, I read Eve of Darkness by S.J. Day and I was introduced to the world of Evangaline Hollis. “Eve” as her friends call her was an interior designer who unknowingly crossed paths with the Biblical brothers Cain and Abel. The brothers brought her into the holy war between those Marked by the forces of God and the Infernals of the Devil himself. 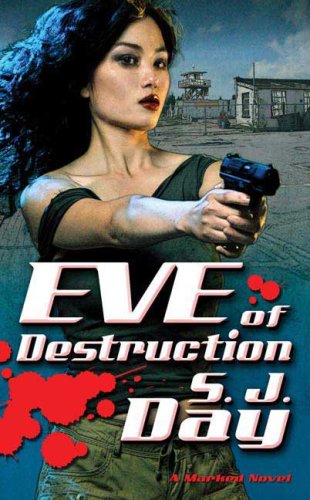 So Eve went from being an interior designer to becoming a bounty hunter for Heaven. Quite a severe career change and one that caused her a bit of trouble in the first book as she started to learn the ropes. Of course, she also has to deal with her boyfriend Alec Cain, her handler Reed Abel, and her over-protective mother Miyoko Hollis.

In the latest book, Eve of Destruction, Eve continues her training as one of the Marked with a class of other people picked for the job. Three weeks where the homework involves killing or capturing Infernals on a nearly abandoned military base.

Of course, “the Devil ate my homework” isn’t a great excuse when you run into conspiracies and hellhounds, but anything will do in a pinch, right?

Add to that a crew from a local cable TV show about ghost hunters and you have untrained Marks and civilians running around when there are demons on the loose… not a good combination.

Where the first book in the series involved a bit too much tawdry romance for me, I found Eve of Destruction to be much more satisfying. It builds on the world we’re introduced to in the first book, with the bureaucracy of Heaven working against the chaos of Hell — all in the everyday world we live in. Like Jim Butcher‘s The Dresden Files series, Day lets us explore an urban fantasy world based around angels and demons of the Old Testament, mixed with the myths and legend of folklore around the world.

Eve is simply trying to stay alive to work off whatever debt Heaven thinks she has – so she can return to the real world and lose her Mark. Each day she learns more about what it means to be Marked and finds that it will be that much more difficult to get out of the life before she’s done.

If you like a bit of romance thrown in with your urban fantasy, then S.J. Day’s Marked Novels should be right up your alley. And if they continue to get better, like Eve of Destruction has, I can hardly wait to see what Day has planned for the next novel of the series – Eve of Chaos, out later this year.

p.s. Pick up all the books in the Marked series at Amazon: