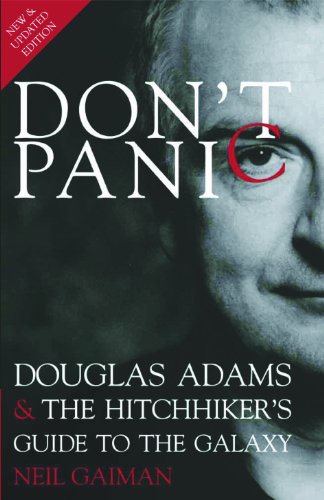 Written with admiration and humor, I found Gaiman’s prose entertaining and enlightening as I learned more about the author who has written so many of my favorite books – The Hitchhiker’s Guide to the Galaxy series, Dirk Gently‘s Holistic Detective Agency, and The Long Dark Tea-time of the Soul. And Gaiman has written two more of my favorite books – Neverwhere and American Gods.

In 1971, Adams was hitchhiking across Europe with a copy of The Hitchhiker’s Guide to Europe when, at the end of a harrowing day, he ended up flat on his back in a field in Innsbruck, staring up at the stars. It was then he had the thought “Sombebody really ought to write a Hitchhiker’s Guide to the Galaxy.” He then promptly forgot about it.

Then, in 1977, he remembered it when he was trying to come up with ideas for radio scripts. And that started a long journey of writing and missing deadlines that continued for the next 24 years. In 2001, Adams passed away when he suffered a fatal heart attack while exercising in his gym in Santa Barbara.

I have read all of Douglas Adams’ novels, including Last Chance to See, which documented his journeys around the world to see how certain endangered species were doing. I’m a huge fan of his unique way of seeing the world.

But I never really knew the bumpy road of the Hitchhiker’s radio program or Adams’ involvement with the Dr. Who franchise. And I didn’t realize that he was involved with the Monty Python troupe. All these little facts are eloquently detailed in Gaiman’s prose.

This version of Don’t Panic is the fifth edition. The first was written in 1988 by Gaiman and it’s seen updates as Adams’ journey and his legacy continued over the years.

To continue that legacy, a new book in the ill-labeled “Hitchhiker’s Trilogy” will be released to commemorate the 30th anniversary of the first publication of The Hitchhiker’s Guide to the Galaxy. Written by author Eoin Colfer, author of the successful children’s series Artemis Fowl, the new book is called And Another Thing…. I’m excited about the upcoming book, as I never really felt that Arthur Dent‘s journey was complete. We’ll see how Colfer does.

Adams will be forever missed, but his legacy will last forever.

If you’re a Douglas Adams fan or a fan of the Hitchhiker’s Guide to the Galaxy, Don’t Panic is a must have for your collection. Be sure to look for it in your local library or favorite bookstore and keep an eye out for Eoin Colfer’s book – And Another Thing…!

p.s. Pick up any of these amazing books below!