Let me start by saying that I’m a huge fan of urban fantasy. Mixing the magical with the everyday world we live in engages my imagination like few other things these days. And as a big fan of Joss Whedon‘s Buffy the Vampire Slayer television series for years, when I heard that Amber Benson (who played Tara Maclay, Willow Rosenberg‘s (Alyson Hannigan) witch companion) had started a new series I knew I should check it out. 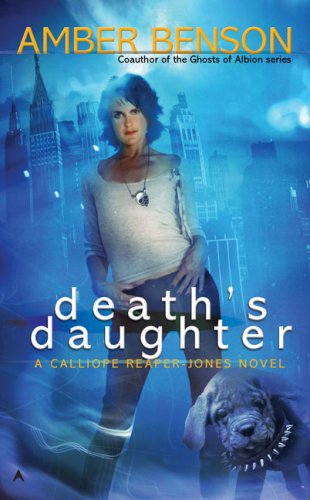 Death’s Daughter is about Calliope Reaper-Jones (also called Callie) and her quest for normalcy in the supernatural world that is her birthright. Callie works in New York City, dating, shopping, and working as a personal assistant for a crazy boss. But when one day her father’s executive assistant, Jarvis, appears magically in the unisex bathroom after Callie has a bad reaction to an organic muffin, her life unravels.

Callie’s father is none other than Death himself. And he’s been kidnapped, along with the rest of the members of the board of Death, Inc. The muffin was an spell to reverse a Forgetting Charm Callie had cast on herself to allow her to forget about her life – her real life – and the supernatural and magical beings who lived there. Immortals, gods, and fantastic creatures enough to fill a thousand tales.

But she wants no part of the family business. And when Jarvis suddenly appears to take her home, her old life comes rushing back. How could she run the business, let alone save her father and the rest of the people kidnapped?

To make matters worse, there are other players in the game. Daniel, the Devil’s protege, wants to be the Grim Reaper. And Callie must accomplish three impossible tasks to gain her father’s mantle and provide the time she needs to rescue him. The first of these tasks is to take a puppy from Cerberus, the three-headed hellhound guarding the gates to Hades. Talk about starting with a bang!

Benson has managed to create a heroine with spunk who manages to get into and out of some tricky situations on her journey to save her family. She has help, including Clio, Callie’s younger sister, and the goddess Kali. And of course there’s Runt, the hellhound puppy she does manage to “borrow” from Cerberus…

I found myself thoroughly entertained by the story and characters. It was an amazingly quick read, only taking a couple of days because I couldn’t put it down!

If you’re looking for a great urban fantasy with a heroine that uses her wits and attitude to combat challenges galore, I highly recommend Death’s Daughter. This is a joy to read and I can hardly wait to see where Benson sends Calliope next!

p.s. Be sure to pick up Death’s Daughter at your local bookstore or favorite online retailer!