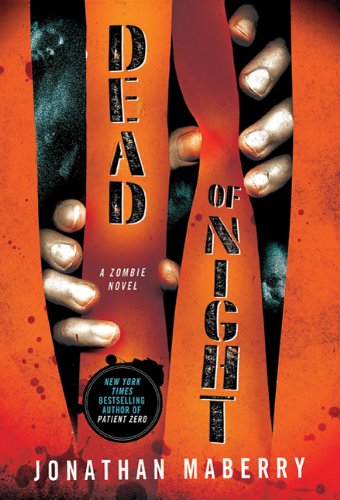 Dead of Night from Jonathan Maberry takes the traditional zombie story from George A. Romero‘s Night of the Living Dead and puts a modern twist on it. This has to be one of the best traditional zombie tales I’ve ever read. A murderer’s body finds its way to a small town morgue instead of a state cemetery after lethal injection on death row. And from that unexpected change in plans… all hell breaks loose.

I won’t hide the fact that I’m a fan of Jonathan Maberry’s work. Ever since reading Patient Zero, I’ve followed each new release and enjoyed them all, especially the ones involving zombies. The recent surge in imaginative reinventions of the zombie genre has been heartening. Books like Mira Grant’s FEED and Maberry’s Rot and Ruin have gone a long way to inject new life to undead fiction.

For me, these stories aren’t about the zombies themselves. Zombies are typically boring characters that have little or no personality of their own (please pardon the pun). It’s the survivors who provide the excitement and contrast. Some survivors are definitely better than others and obviously not everybody survives as long as everybody else, but it’s about the journey from life to death or undeath that provides the heart of these stories. Who comes out in the end and are they left with as much humanity as they had when the whole thing began?

In Dead of Night, it’s police officer Dez Fox and reporter ex-boyfriend Billy Trout who form the chewy center of this zombie candy bar. Dez has issues with relationships and alcohol, but is a damn good cop with combat experience from the military. And Trout is a dedicated reporter who can smell out a story and stick with it wherever it leads. But nobody ever expects the dead to rise unless it’s in a horror movie… And even when it happens in your home town, it might take you a while to accept that the dead are actually rising.

The book starts slowly to introduce the microcosm of Stebbins, PA, and its people. Once things get started in the town mortuary however, it’s a roller coaster that doesn’t let up. The thought that kept going through my mind was if this book didn’t get optioned and made into a movie by Halloween 2012, I’m going to be shocked. This one should be fast-tracked and in theaters for folks to get the crud scared out of them. As I was reading, I was imagining the scenes and it has more than a few chills and thrills to make you jump in an audience.

I do have to say that if you’re a fan of Maberry’s other works, you might be a little surprised at the writing style of this one. I was a bit put off until I got into the groove after about 30 pages, but after that it was a thrill ride to the end. And though I don’t want to spoil anything for you if you’re planning on picking this up, I have to talk about one thread that weaves through the whole book. Have you ever wondered what it’s like to actually *be* a zombie? Well, Maberry found a way to do just that – and it has to be one of the most unique twists on zombie fiction I’ve ever read.

“He could feel everything.
Every. Single. Thing.
Jolts in his legs with each clumsy step. The protest of muscles as they fought the onset of vigor even as they lifted his arms and flexed his hands. The stretch of jaw muscles. The shuddering snap as his teeth clamped shut around the young police officer’s throat.
And then the blood…”
– Chapter Sixteen, Dead of Night by Jonathan Maberry

Night of the Living Dead hits book stores today! Be sure to order your copy so you have it on hand for a little light horror reading this Halloween!