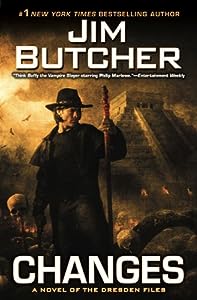 Harry Dresden is one of my heroes. I’ve been reading about Jim Butcher‘s modern wizard since I found the first book Storm Front in the early 2000s. It’s a perfect mix of urban fantasy, adventure, and sarcasm. Yes, I said sarcasm. He’s willing to provide a wisecrack to the most powerful beings on the planet or the guy next door. I value that devil-may-care attitude.

This isn’t your traditional wizard. For one, he lives in modern day Chicago and works as a private investigator. Well, he used to when he had more time. Lately he’s been helping out in a war between the White Council of wizards and the Red Court of vampires that he might have started…

Ok, maybe I should start at the beginning. Harry Dresden is a wizard in every sense of the word. He casts spells, speaks with spirits and other supernatural beings, crosses into the realm of faerie, and hunts for monsters who seek to hurt innocent (and sometimes not-so innocent) people. He lives and works as a special private eye in the bustling metropolis of Chicago, Illinois. I say special, because it’s not often you see ads for a “Wizard for Hire” in the yellow pages.

Author Jim Butcher published the first novel of the “Dresden Files” – Storm Front – back in 2000. Since then he’s published eleven more novels set in the Dresden universe, all focused on his wizard/detective. Each has put Dresden and his friends in harms way more times than I can count and not everyone has come out unscathed or alive. Sometimes the things making noise in the darkness are out to get you and won’t stop until they succeed…

Harry Dresden has changed over time. He’s not quite the same hot-headed young wizard he was when he started. By the time Changes starts, he’s taken on an apprentice – Molly Carpenter, the daughter of his good friend Michael Carpenter who is a retired Knight of the Cross – and becoming a teacher has mellowed him out greatly.

Beyond that… Harry has a dog – Mouse, a Tibetan Mastiff who protects Harry as much as anyone can – and a cat – Mister, a large gray tomcat who (like most cats) has a serious attitude. Harry has a magical skull that contains the spirit of a former powerful wizard – “Bob” – who has a soft spot for romance novels. And Harry has a lot of good friends, among them Karrin Murphy, a police detective in the Chicago Police’s “Special Investigations” unit. SI handles the weird cases nobody wants to deal with but everyone wants dealt with quickly and quietly. Inevitably Harry gets involved somehow.

When Changes starts, Harry gets a phone call that literally changes his life. He’s told by his former girlfriend, Susan Rodriguez (one-time lover and reporter, now half-vampire), that he has a child and the child is in danger. In true Dresden form, Harry kind of goes off the deep end to save his daughter from the Red Court of vampires who would really like to see him dead.

I don’t want to spoil this book for anyone. It, like all Dresden novels, was one heck of a page turner. I devoured this book in about 8 hours spread out across two days and that’s fast even for me.

However… I will mention two things in case you’re a Dresden fan and haven’t picked this up yet. First of all, you get to meet Odin from Norse mythology. Suffice it to say that the scene in which that happens is one of my favorite of the entire book and made me think back to American Gods by Neil Gaiman, which I will now have to re-read. Second, you get to hear Mouse talk. Yes, it makes sense in the context of the story and made me laugh out loud.

If you like urban fantasy (fantasy fiction set in the modern world) and haven’t read any of the Dresden books, I would encourage you to start at Storm Front and work your way up to Changes. If you are already a Dresden fan, I would encourage you to read Changes if you haven’t already done so. This book was a blast and somehow Butcher continues to turn out amazing, entertaining stories in Dresden’s world. Next up will be Butcher’s Side Jobs short story and novella collection combining numerous Dresden short stories in one place, including a follow-up to Changes. Look for that to arrive in late October 2010!