When you have young children, you are often fighting a battle between entertaining them and educating them. The younger they are, the less attention span they typically have, which means that entertainment often occupies the lion’s share of the job. As they get older, they are more able to entertain themselves. So what, you may ask, does this have to do with a book about Picasso‘s art? 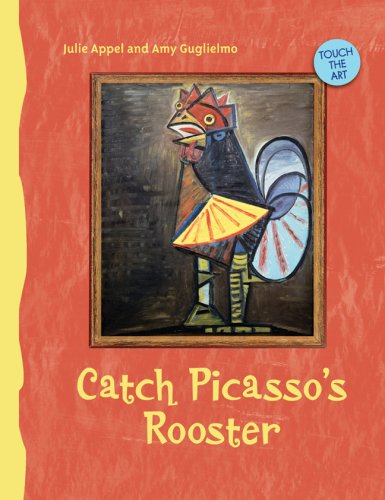 Touch and feel books have been around since the 1940s. Pat the Bunny by Dorothy Kunhardt has been a perennial favorite for parents since first being published in 1940. It includes actual materials for readers to experience themselves, such as a bit of fake rabbit fur and a piece of sandpaper. Since then, I know we’ve seen many different variations on this theme, including Tails by Matthew Van Fleet, which includes not only physical “tails” of various furry or bumpy types, but also a “scratch-n-sniff” stinky skunk tail, which has been a favorite for both of my girls.

Catch Picasso’s Rooster and the rest of the “Touch the Art” series merges the tactile appeal of other “touch and feel” books, but also introduces works of art – in this case those of Picasso, Rousseau, van Gogh, and others – to a young audience. This combination of entertainment and education works on a couple of different levels.

First, by integrating colorful works of art and a simple, rhyming story, youngsters who are having the book read to them are engaged by visual and auditory cues as well as tactile ones as they touch the various materials on a given page. For example, on the page featuring Albrecht Durer‘s “Hare” painted in 1502, the authors reinforce that it’s a bunny in the picture through the text (“Rooster, rooster! Stop running away! I hid near a bunny sleeping in hay.), the picture, and a scrap of fake rabbit fur integrated into the picture. We enjoyed working through the book with my youngest who’s not reading yet, but loves interactive books such as this one.

Second, the books have lasting value for more independent readers, since they include facts about the painting and the artist in a section titled “Artifacts” at the end of the book. My eldest daughter loves art and is fascinated learning about classical painters such as Rousseau. And we learned that Rousseau didn’t start painting seriously until he was 40 and he taught himself how to paint by copying paintings at the Louvre Museum in Paris.

If you’re looking for holiday presents for youngsters, I can’t recommend this series enough. As children grow, they can get more and more out of these books as their skills develop. Catch Picasso’s Rooster will sit proudly on my kids’ bookshelves for a few years as they grow and learn. And now I want to check out the other books in the “Touch the Art” series! Look for these books at your favorite bookseller.

p.s. Pick up these great books below!