Urban fantasy is one of my guilty pleasures these days. In a time where the modern world is full of fear, uncertainty, and doubt, it’s nice to believe, even just for a brief moment, that there’s a little more magic in the world and anything is truly possible. It doesn’t hurt that there have been some great new urban fantasy stories to read lately, such as Alex Bledsoe’s The Hum and the Shiver. 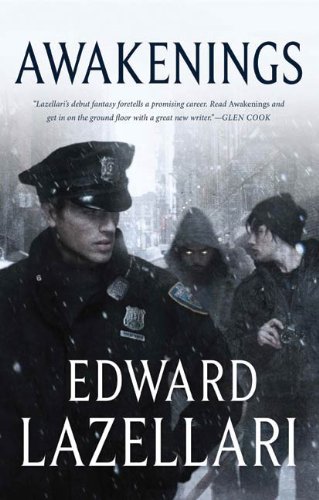 In Awakenings, author Edward Lazellari introduces us to an unlikely group of heroes in a multiverse where a little magic still exists here on Earth. Cal MacDonnell, Seth Ramcrest, and Daniel Hauer live lives very different from one another. One is a cop. One is a photographer/pornographer. And one is a 14-year-old student. But one thing connects them all. Thirteen years ago they seemed to just wink into existence. None of them remembers anything before that night that haunts their dreams.

Now, thirteen years later, events are conspiring against them. Cal finds himself on patrol with his partner when they encounter a giant with a sword. Seth meets an unusual lady who leads him away from his apartment shortly before it explodes in a fireball. And Daniel can’t seem to get through a single day without incurring the wrath of his principal, his step-father, or bullies at his school.

Awakenings is the first book in a series and Lazellari’s fantasy debut. It mixes actual multidimensional theory (M-theory, an outgrowth of string theory in physics) and the idea of multiple universes separated by thin membranes with a story that interlinks the lives of people in two separate worlds for quite an intriguing setting. Obviously not all the secrets of the series are revealed in the first book, but I’m curious to see where Lazellari is taking things.

My only beef with the book is the fact that the ending defies fantasy series convention a bit. Usually each book in a series will take a few of the overall story threads and keep a few going from book to book but resolve a few in each book. This leaves you wanting to know more but satisfied that least a few things have been wrapped up. Lazellari ends Awakenings more like the season finale to a TV show where you’re left hanging until the next season starts back up. Regardless of whether it was intentional or accidental, I’m now on the hook to read the next book in the series.

That said, the writing itself is excellent. Early in the book he describes the lack of sensation as a character gets her head chopped off:

“She heard a creak behind her. Before she could turn, there was a swish, like the sound of a switch whipped through the air. Then silence. Not a drop of rain, not a squeak; someone had pulled the plug on the whole world…”

I’m definitely intrigued by the idea of a multiverse based on String theory where on the other side of one of the membranes from Earth is a world of magic locked in a medieval struggle. And the Odd Couple-vibe of Cal and Seth working together just adds to the intrigue.