When I first saw the title and description for Every Picture Tells a Story, where art critic Waldemar Januszczak (The Sunday Times, U.K.) explores the history of eight different paintings from master artists such as Gainsborough, da Vinci, and Monet, I thought I would be taken on an interesting ride into art history. My eldest daughter has become very intrigued by different classical painters and techniques, and I hoped this would be something we could do together to learn about some of these masterpieces. 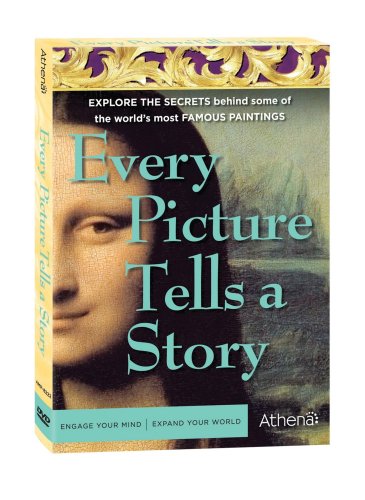 Though I know Januszczak is brilliant and knows his art, this has to be one of the driest explorations of art on record – at least for the casual art lover. He presents a ton of information about each painting, and does find some quite curious conspiracies and gossip about each of them. But he does it with such dry British wit that I found myself dozing off between segments. This DVD collection is meant for more serious lovers of art history than we currently have at my house.

That said, I have to say I was impressed with the depth each episode goes to for each painting. Not only does the host talk about the style of art itself, but about what was going on during the historical period of the painter, where the work was done, and in some cases what other artists and writers were doing during the period in question. And to spice it up a bit, he also relates some of the gossip surrounding each work.

Each episode is less than 25 minutes and Januszczak does his best to make sure the whole episode isn’t filmed inside a museum with shots of him and the painting. For example, when discussing Thomas Gainsborough‘s “Mr and Mrs Andrews,” he filmed segments from the tree which was in the background of the painting. It provided an interesting backdrop to the discussion of what was proper at the time and how the area has changed since the 18th century. And when discussing “The Anatomy Lesson of Dr. Tulp” he traveled to the Netherlands and explored the locations where people would gather to watch autopsies for fun.

The eight episodes are on 2 DVDs and include discussions of “Mr and Mrs Andrews” (Gainsborough), “The Anatomy Lesson of Dr. Tulp” (Rembrandt), “The Tempest” (Giorgione), “The Birth of Venus” (Botticelli), “Boy Bitten by a Lizard” (Caravaggio), “Mona Lisa” (Leonardo da Vinci), “Le dejeuner sur l’herbe” (Manet), and “The Arnolfini Marriage” (Jan van Eyck).

In addition to each episode, there is “The Rest of the Story”, which provides additional background on each episode in a Q&A format, as well as a biography for each artist and a booklet. The booklet includes a summary of each episode, with a image of the painting being discussed as well as a set of questions to consider, a list of other works discussed, and a bibliography for further investigation.

Every Picture Tells a Story was not my cup of tea, but I can definitely see its use as an educational aid for high school or college art classes. Januszczak has a firm grasp of the historical significance of each masterpiece and his love for the arts is evident. If you are an art student or teacher, I’d definitely recommend picking it up.

p.s. Pick up Every Picture Tells a Story at Amazon below!